Kathleen is a registered nurse that has experience working in the hospital and has been practicing as a forensic nurse examiner since 2011. She is qualified to perform exams for patients of all ages and was previously employed as the Director for a SANE program as they expanded from one busy county into a neighboring rural county. Kathleen believes every victim of sexual assault deserves a quality medical forensic exam and is passionate about bringing quality forensic nursing services to our area. 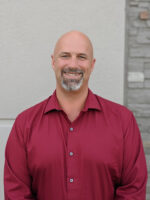 Affiliation: Staff
About Me:

Robert Nixon graduated from Madonna University with his Undergraduate Degree in Social Work. Robert then earned his Master’s Degree in Clinical Social Work from University of North Dakota.

Robert began working in the child welfare system in 2011 and investigated concerns of potential child abuse and neglect. Robert has been involved with the trauma initiative roll out in Roscommon County providing a perspective of how trauma can impact children, families, and the community. Robert has joined the team at the CAC to help in the healing process of children that have been affected by abuse and trauma.

To reduce the trauma of child abuse and neglect by providing prevention, intervention and advocacy.